Chicago / IL. (npd) Although restaurant and foodservice visits are still down in most countries around the world, the global foodservice industry experienced slight growth as a result of increased consumer spending in the quarter ending June 2010 compared to same quarter year ago, according to The NPD Group, a leading market research company. NPD´s foodservice market research finds that the industry´s bright spots were Canada and China where foodservice traffic increased. With China´s economic recovery and increased consumer confidence, foodservice traffic increased by 13 percent, and Canada´s improved by a more modest gain of two percent.

According to NPD´s CREST®, which tracks commercial foodservice usage in Canada, China, France, Germany, Italy, Japan, Spain, United Kingdom, and United States, the countries with the steepest traffic declines in the second quarter include Italy, Japan, and Spain. Spending increased, at least slightly, in the United States, Canada, United Kingdom, Germany, and China. Japan, where traffic was flat, was the only country with a measurable decline in the amount spent per person. 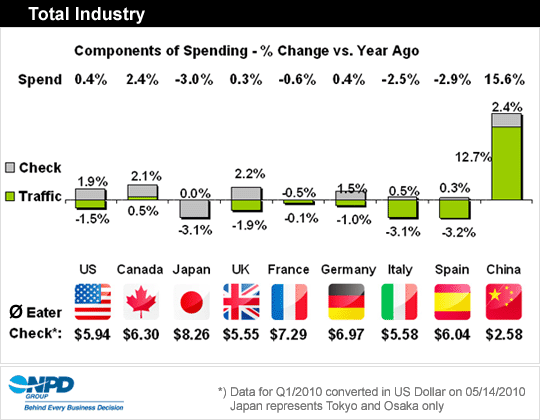 «Around the world, most of our analysts describe their economic environment and industry performance as ‘not so good, but not as bad as it was before’», says Bob O’Brien, senior vice president of global foodservice at NPD. «This amounts to faint hope for a broader environment of robust health».

The increase in consumer spending at foodservice outlets for two consecutive quarters in the United Kingdom reflected the country´s somewhat improving economy.

«Although traffic was still down for most foodservice segments except quick service, the rate of decline in the second quarter was slower than the first quarter», said Guy Fielding, NPD director of business development, United Kingdom foodservice. «The travel and leisure foodservice segment and full service restaurants saw the rate of visit declines halved».