New York City / NY. (ncs) Since the emergence of the Covid-19 global health crisis, 96 percent of Americans say they clean and disinfect their homes as much or more than before; nearly half (47 percent) are eating healthier and half are cooking more; and almost one in seven are watching more television as a form of self-care and snacking while they do it. These new or increased consumer behaviors have contributed to a 14 percent increase in American household grocery spending, according to NCSolutions), the leading company for improving advertising effectiveness for the consumer packaged goods (CPG) ecosystem.

Marking the one-year anniversary of the Covid-19 pandemic, NCSolutions conducted an analysis of 12 months of its consumer purchase data as well as findings from a newly fielded (March 2021) nationally representative consumer survey with 2,017 respondents, ages 18 or older. The combination of these two data sources demonstrate how the American grocery basket has evolved over the past year. The insights also point to what other consumer behaviors have changed as a result of this pandemic, which could potentially have a lasting impact.

Is Obsessive Cleaning The New Norm?

Since the start of the pandemic, Americans have made it a top priority to clean and disinfect their homes as a way of preventing spread of the virus. Nearly all respondents – 96 percent – say they spend the same (55 percent) or more time (41 percent) cleaning now than pre-pandemic, according to the consumer survey.

In terms of how much they spend for products for cleaning and disinfecting their homes, 89 percent say they spent the same (54 percent) or more (35 percent) since the pandemic began. Notably, almost a third of consumers (32 percent) say they have no plans to go back to their pre-pandemic rates of cleaning.

NCS consumer purchase data supports this consumer sentiment. Spending on cleaning products is up 36 percent year-over-year (March 2020-February 2021) compared to the same period a year prior. The increase is more than in any other grocery category. 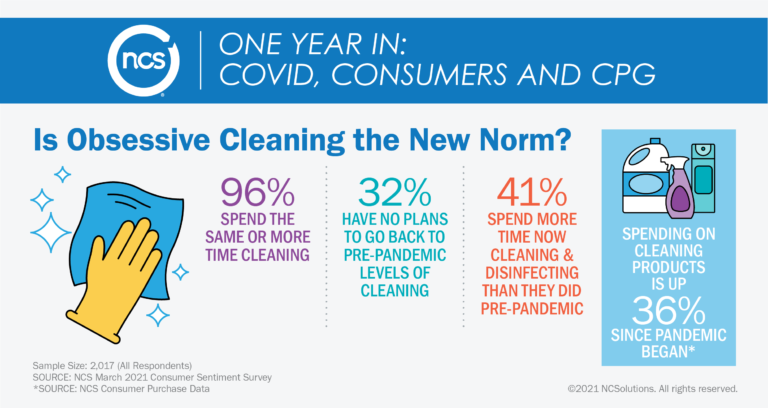 Staying Healthy In A Pandemic

A significant number of respondents are following expert guidelines. Eight in 10 consumers report wearing masks, three-quarters of respondents practice social distancing and more than half say they take vitamins and supplements (55 percent), according to the NCSolutions consumer survey.

No matter where they shop, Americans are adding healthy food and supplements to their baskets. Spending on fresh produce is up 24 percent compared to the year prior, and purchases of vitamins and supplements are up 21 percent year-over-year, according to NCS consumer purchase data. 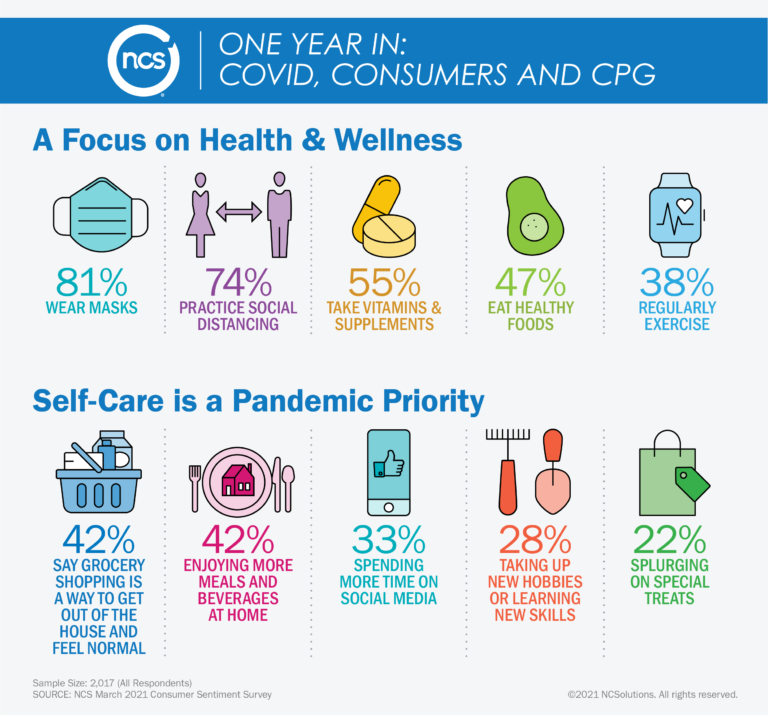 «The big question on everyone’s minds is: Which of these newly formed behaviors will stick? Looking back at history, we see numerous examples of behaviors changing post-crisis. After the excesses of the Roaring Twenties and the poverty of the Depression, for instance, many people became extremely cautious about money. Some went as far as to save money in their mattresses – behavior that lasted for decades,» said Linda Dupree, chief executive officer, NCSolutions.

«We expect Americans to sustain their higher interest in CPG products and activities that foster self-care and well-being – both physical and emotional – for some time.»

The survey reveals more than half of Americans (56 percent) don’t believe the pandemic will subside until 2022 or later, while a resounding 80 percent are optimistic about the post-vaccine environment. 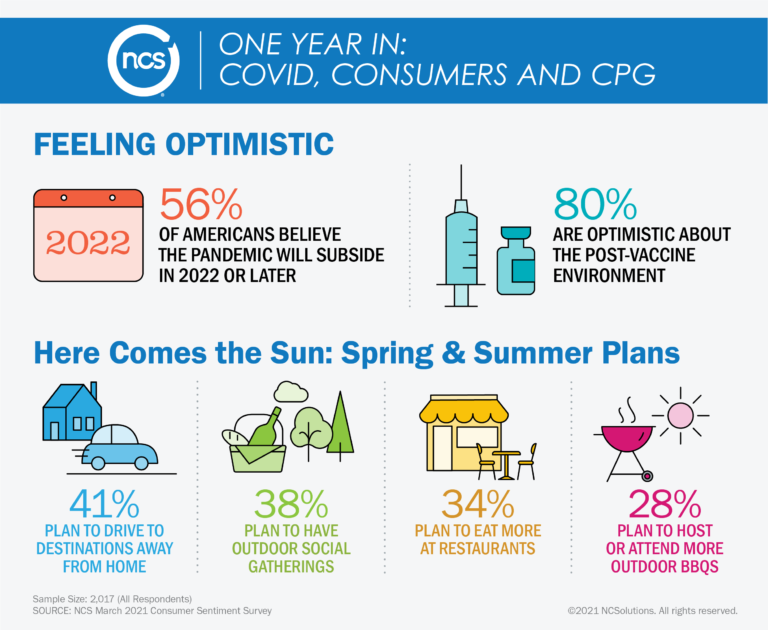 Cooking at home is now a staple of the American diet. Almost half (47 percent) of respondents say they cook more frequently now than before the pandemic.

Frozen foods (29 percent), staples such as dry grains and beans (28 percent) and baking ingredients (27 percent) were the food categories with the highest growth during the pandemic, according to NCS consumer purchase data. Many of these high-growth categories reflected the need to keep pantries stocked and to support more cooking at home. 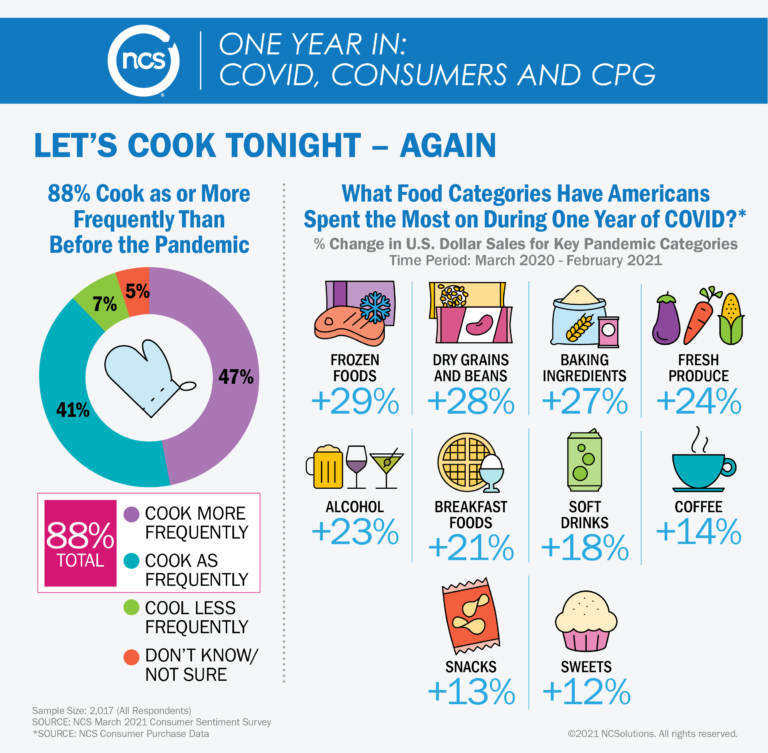 Television As An Emotional Salve

Home entertainment played an important role as an emotional healer during the pandemic. According to the consumer survey, 69 percent of Americans say watching television and movies is the top activity they engage in to take care of themselves emotionally since the start of the pandemic. In terms of other media, Americans are using it as a coping source, 33 percent of Americans are using social media more and 28 percent say they are doing more reading of magazines and books.

Forty-two percent of consumers say they enjoy more meals and beverages at home, a sign of the convergence of home cooking and entertainment. Dinner and a movie «out» has turned into dinner and a show «in.» 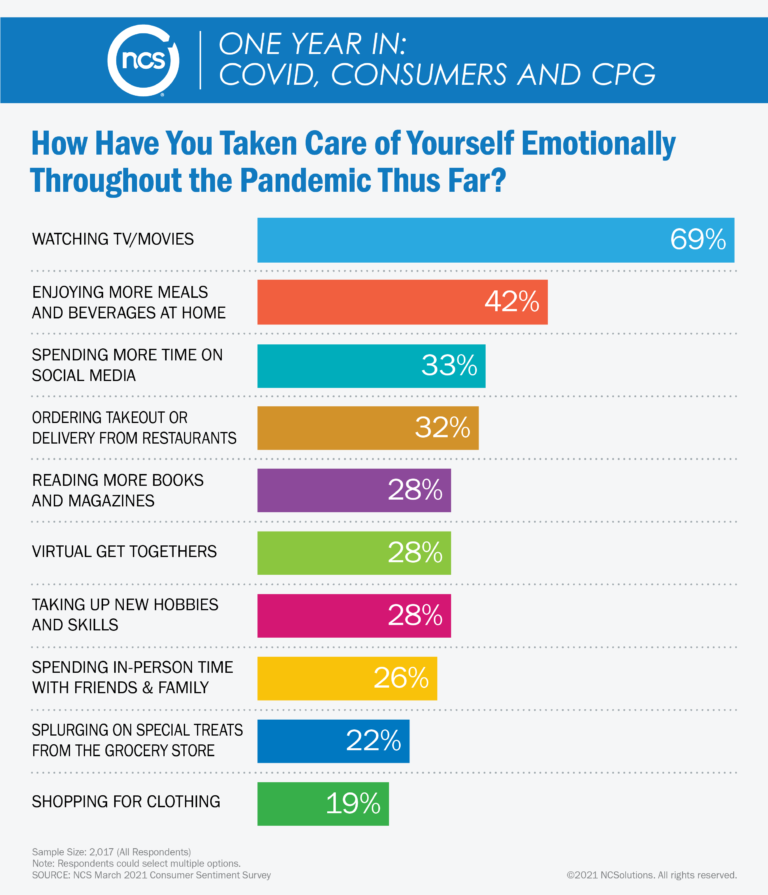 Entertainment And Snacking Go Together 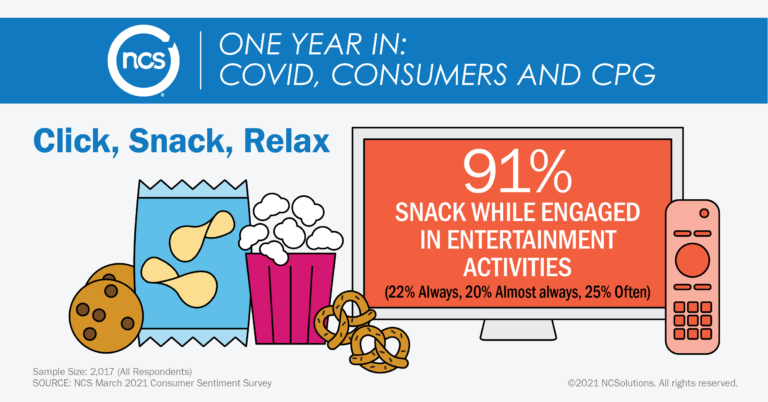 The top 10 food and household items Americans say they must always have a supply of in their homes include cleaning supplies (81 percent), which ranked number one. But six other items related to managing physical and emotional health were also deemed necessary. These include: healthcare items such as painkillers and thermometers (63 percent); proteins such as chicken, fish and eggs (63 percent); fresh fruits and vegetables (63 percent); snack foods (58 percent); baking ingredients (55 percent); and vitamins and supplements (54 percent). 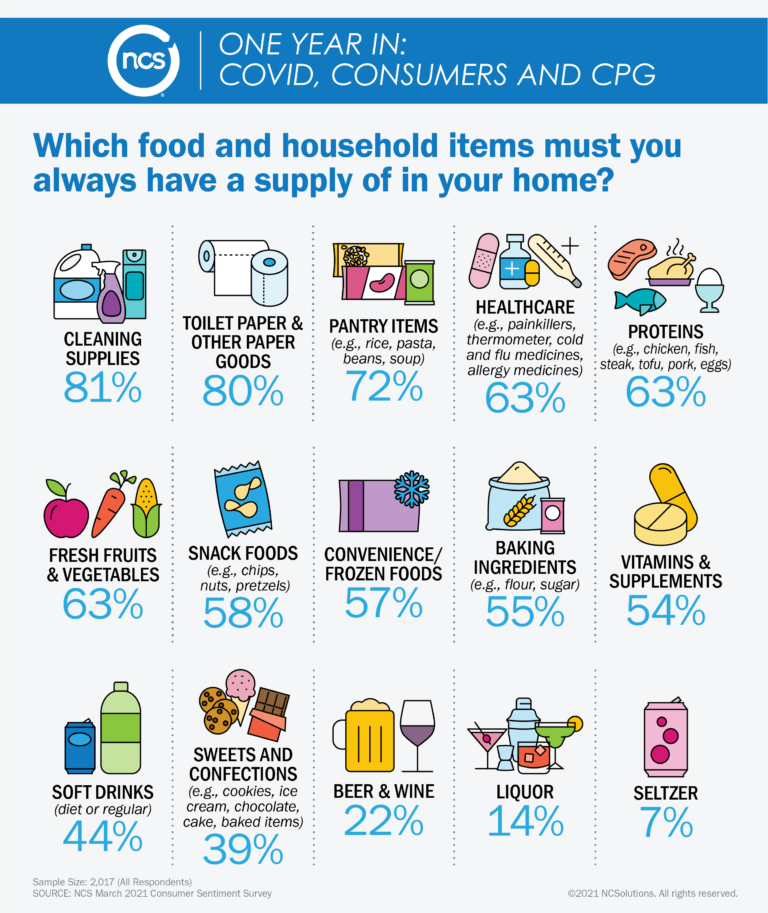 «Pandemic pantries, home-centric entertainment, cleaning mania, fixation on health and wellness and an increase in spending on groceries, this is the American sensibility today,» said Lance Brothers, chief revenue officer, NCSolutions. «These consumer spending and sentiment insights are indicators for CPG advertisers about the market’s evolution. As spring and summer approach, Americans view the pandemic with a light at the end of the tunnel. They will continue to adapt to the next market phase, making it an ideal time for CPG brands to increase their presence in market to elevate their market share.»

After one full year of pandemic shopping, consumer packaged goods (CPG) spending grew an average of 14 percent year-over-year from March 2020 through February 2021, as compared to the prior year (March 2019 – February 2020), according to the latest NCS data.