Copenhagen / DK. (ikea) A public rooftop park, 250 trees, 1450 square metres solar panels, and parking for 760+ bikes. These are key elements in a new, innovative Ikea city store – in the centre of Copenhagen. The city store concept is designed for convenience, inspiration, and urban consumer behaviour. Both the idea and architectural approach cater to Copenhagen’s infrastructure and green visions for the future. Ikea Copenhagen is designed by Dorte Mandrup and will open in 2023. 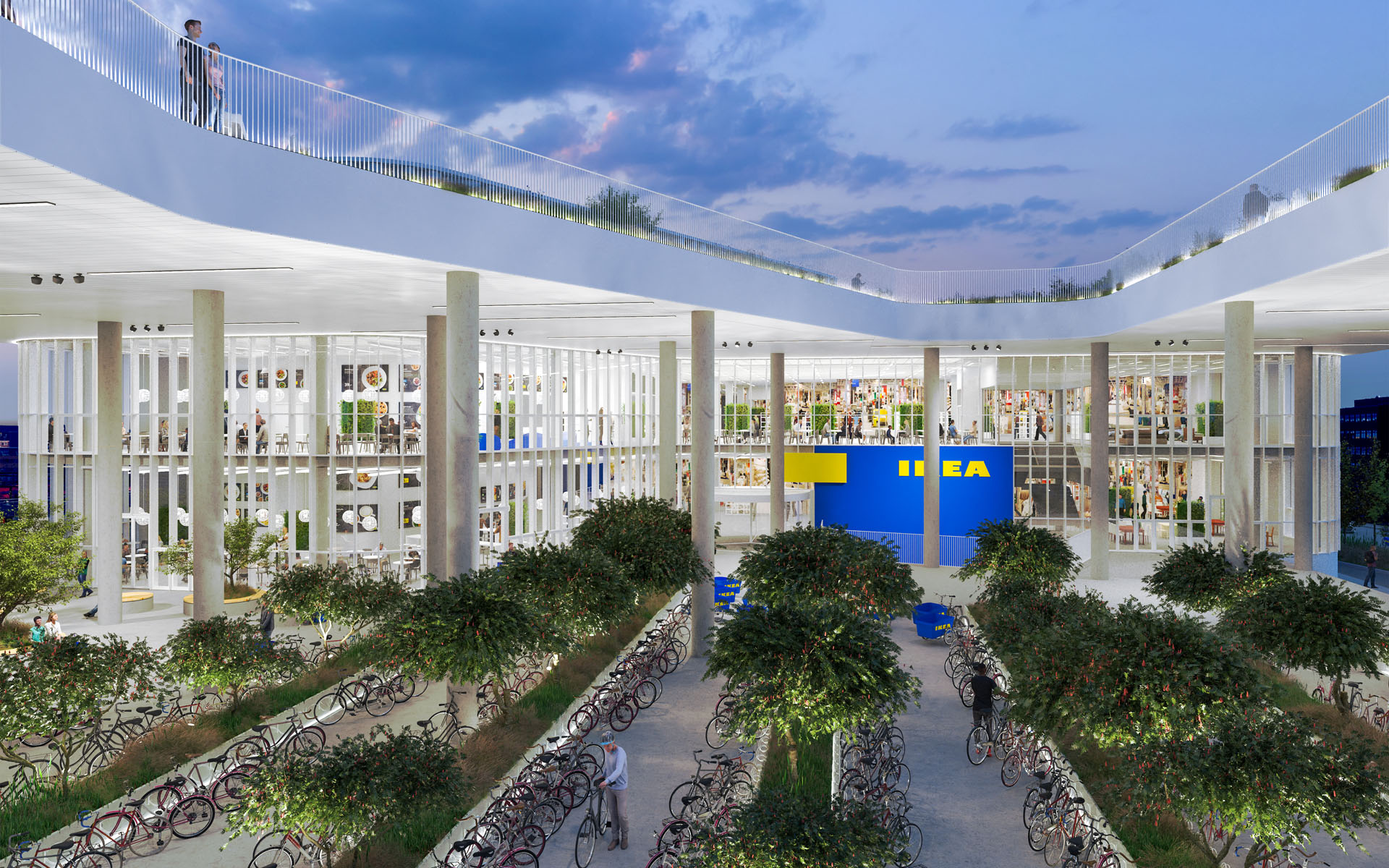 More and more people are moving into cities, and so is Ikea. To bring Ikea closer to where people live and work, the expansion into cities is speeding up, always hand-in-hand with the network of Ikea stores and an improved digital experience.

The latest store to be announced is the new Ikea city store in Copenhagen, which will be tailored to the Copenhageners. Both in terms of accessibility for the many cyclists in the city, and the urban consumer behaviour. Almost half of the citizens in Copenhagen bike to work and only one third has access to a car. As a result, Ikea Copenhagen will serve customers with 760+ bike parking lots, inspiration and solutions for city homes, and offer on-the-day delivery to their doorstep. The only items to bring home from the city store will be anything that can fit into the iconic blue Ikea bags.

«This will be a completely new experience for the Copenhageners. Ikea Copenhagen is much more than a store. You will find inspiration and delivery options to your door, making it a new shopping experience at Ikea. But the city store will also be a new meeting place and the architectural concept supports that. Locals won’t necessarily meet there to shop, they can also stop by for a coffee on the go, dwell on the roof top, or meet friends for dinner,» explains Jette Jørgensen, Group Expansion Manager from Ingka Group.

The city store will be located a stone’s throw away from the nearest train station, the Meatpacking district and the inner-city harbour, making it accessible for 1.1 million people within 20 minutes by bike, car or public transport. Adding to its unique location, the city store will also include a restaurant, café, and an external partner on the publicly accessible rooftop park – making it a new meeting place in the city.

A green and sustainable building

Ikea is aiming to become a circular business by 2030, making it easier for its many customers to live a more sustainable life at home. The new city store concept in Copenhagen is the next step in this direction. The city store will aim for the BREEAM outstanding certification, making the building phase and the daily energy use as sustainable as possible. Key components to achieve this goal includes 250 trees and bushes, 25 percent of the façade covered in greenery, 1450 m2 solar panels placed on the upper roof of the building, and re-using water from the canals to cool the store.

The extraordinary architectural concept is developed in collaboration with architect Dorte Mandrup, a world-renowned architecture studio based in Copenhagen. The architectural idea makes the new Ikea Copenhagen stand out from the crowd, and it completely challenges the notion of the classic blue and yellow Ikea.

«The facade draws inspiration from a white curtain motif. Flowing down from the edges of the rooftop park, the curtain is pulled aside in a few places, revealing the displayed items inside. In between the ripple folds of the curtain at street level, a pedestal gives opportunities for a rest in the midday sun. The public spaces created around, in front and on top of the building is an important aspect of the design, as it creates much-needed green meeting places in the very densely populated Vesterbro. With the rooftop park, we want to give back a green lounge to the local community and create both intimate resting places and opportunities for spontaneous meetings», says Dorte Mandrup, founder and creative director at Dorte Mandrup.

The architectural idea upgrades the infrastructure in the area as it allows locals to walk from the southern part of the Copenhagen – across the new Ikea rooftop – all the way to the city centre. Along this walkway, locals will meet a high degree of biodiversity from various plants and bushes on the rooftop park while enjoying unrivalled views of Copenhagen.

Ingka Group (Ingka Holding B.V. and its controlled entities) is one of 12 different groups of companies that own and operate Ikea retail under franchise agreements with Inter Ikea Systems B.V. Ingka Group has three business areas: Ikea Retail, Ingka Investments and Ingka Centres. Ingka Group is a strategic partner in the Ikea franchise system, operating 389 Ikea stores in 32 countries. These Ikea stores had 706 million visits during FY20 and 3.6 billion visits to Ikea.com. Ingka Group operates business under the Ikea vision – to create a better everyday life for the many people by offering a wide range of well-designed, functional home furnishing products at prices so low that as many people as possible can afford it (Photos: Ingka Group).