As part of its goal to drive innovation within the USD 3 trillion global fruit and vegetable market[1], Infarm today introduced its new high-capacity, automated, modular Growing Center – a local farm and distribution center in one, that can generate the crop-equivalent of up to 10,000 square metres of farmland, with up to 400 times higher efficient food production than soil-based agriculture. 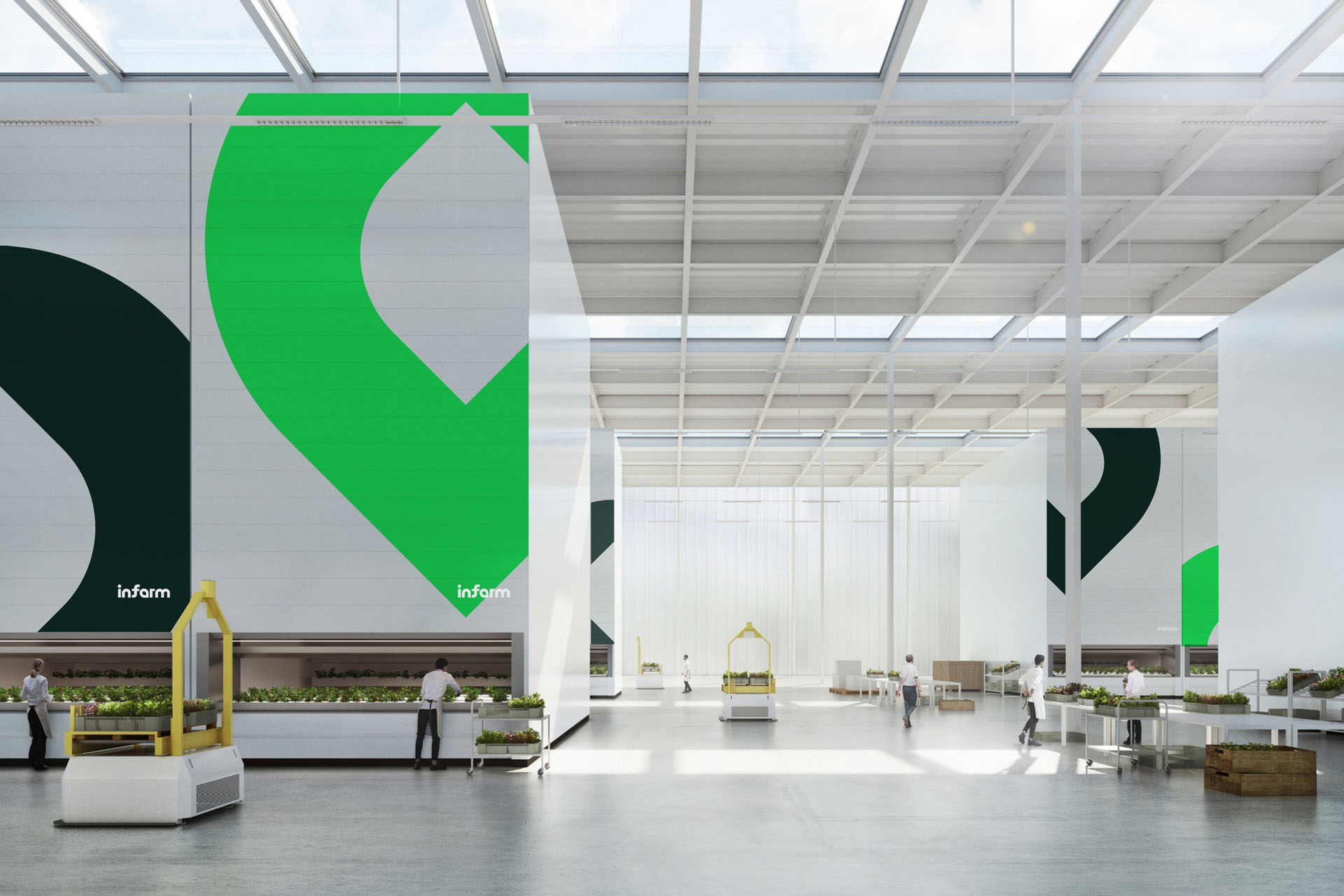 The cloud-connected, high-yield growing centers join Infarm’s expanding global network of self-learning farms that improve plant yield, taste, and nutritional value constantly, while further reducing the use of natural resources. With 50,000 square metres of farming facilities and hundreds of farms in stores locations, Infarm is already providing fresh produce to 50 percent of the world’s largest food retailers. The rapid deployment capability of the new high-yield Growing Centers will drive additional global growth and scalability to match the needs of retailers of any size in any location, with the goal of growing the network to 500,000 square metres by 2025.

A Growing Center is comprised of dozens of modular farming units, each standing between 10 and 18 meters high, occupying a 25 square metres ground footprint and requiring just six weeks to build, yielding the crop-equivalent of 10,000 square metres of farmland. This modular, data-driven, and distributed approach – a combination of big data, IoT, and cloud analytics, in addition to rapid growth at a global scale – sets Infarm apart from any other farming solution.

«Access to fresh, local and sustainable food is a growing challenge, as people shift towards cities and climate change accelerates,» explains Erez Galonska, co-founder and CEO of Infarm. «Today we’re adding speed to scale with new technology that allows us to deploy a Growing Center to any city in the world in a fraction of the time, space and capital investment of most large-scale farming solutions today. Both the farms and the software that powers them were designed to make fresh food more accessible for everyone, everywhere.»

Growing a new food system for people and planet

«The entire Infarm network is connected to a central farming brain that gathers more than 50,000 growth, color and spectral data points through a plant’s lifetime,» explains Guy Galonska, co-founder and Chief Technology Officer at Infarm. «We’ve collected more than 300 billion data points throughout our farming network to date. These data enable us to perfect our growing recipes and improve yield, quality and nutritional value, while reducing the production price constantly.»

The large-scale Infarm Growing Centers integrate farming units that can each save up to 10,000,000 liters of water per year, compared to soil-based agriculture for similar crops, while contributing up to 40 percent energy savings over previous Infarm technologies.

By 2025 Infarm plans to establish 100 Growing Centers – equivalent to 1.5 million square metres of farmland and producing 450,000,000 plants across its network, including expanding to new markets. This year, 15 Infarm Growing Centers are already planned/or under construction in major urban centers, including London, Paris, Copenhagen, Toronto, Vancouver, Seattle and Tokyo.

Infarm was founded in Berlin in 2013 by Osnat Michaeli and the brothers Erez and Guy Galonska. Passionate to become self-sufficient and eat better, they were growing their own food, enjoying all the flavor and nutrients, without the chemical pesticides and transport kilometers. With the aim to share the goodness of own-grown produce with everyone, they developed a smart modular farming system, that allows distribution of farms throughout the urban environment, growing fresh produce in any available space and fulfilling any market demand. Today, with cutting edge R+D, patented technologies, and a leading multi-disciplinary team, Infarm is growing a worldwide farming network helping cities become self-sufficient in their food production, while significantly improving the safety, quality, and environmental footprint of our food.