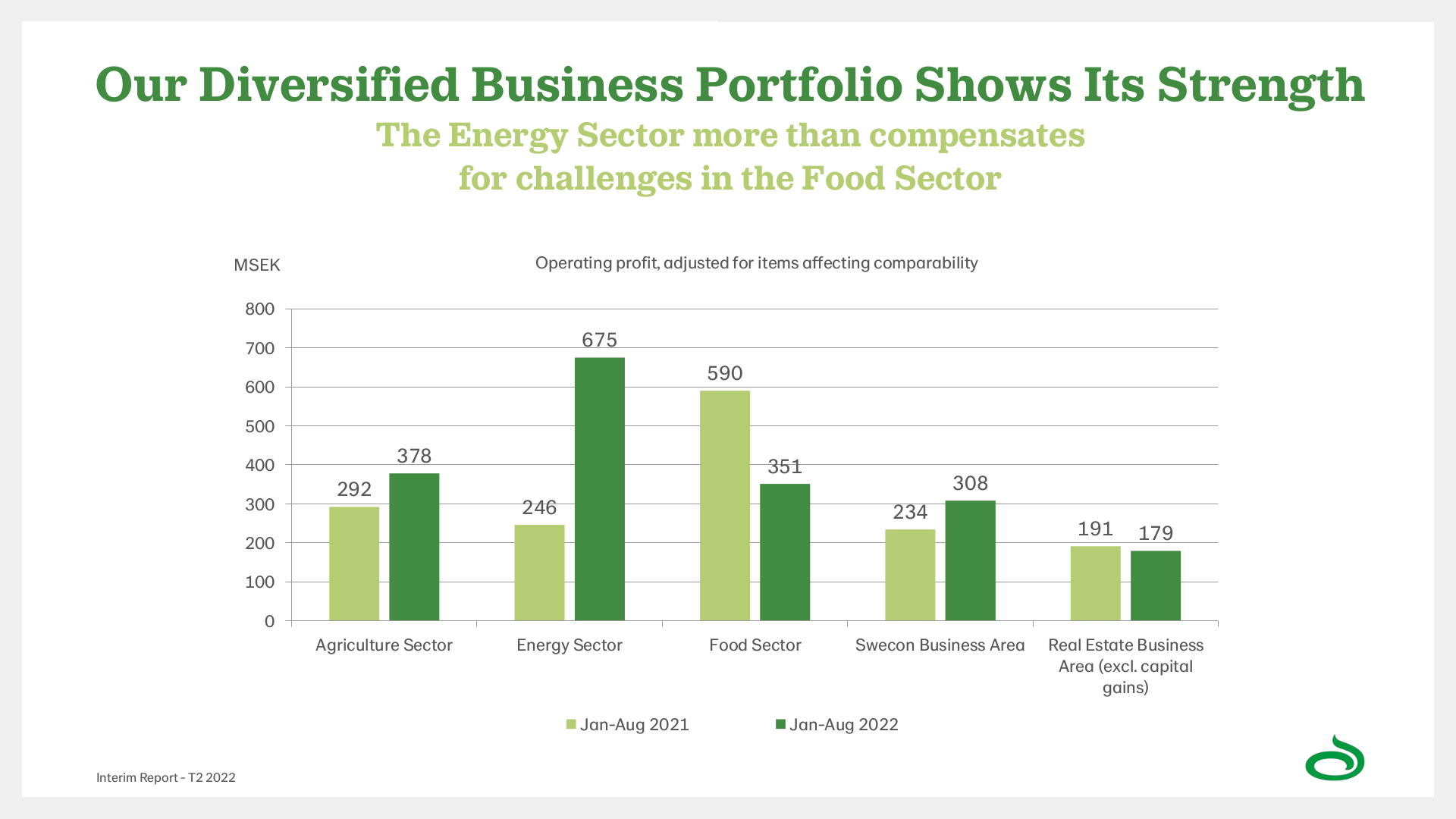 «Lantmännen’s result continues to develop positively, driven in particular by a very strong result in the Energy Sector. The Swecon Business Area and the Agriculture Sector also deliver higher earnings, while our Food Sector businesses face challenges – mainly in the form of higher costs of inputs and energy, which have not yet been fully compensated by price increases,» says Magnus Kagevik, Lantmännen’s Group President and CEO. The figures below refer to operating profit adjusted for items affecting comparability. Last year’s results in parentheses.

The Agriculture Sector shows a result of 378 MSEK (292). The result has been positively affected by the reversal of a provision related to electricity tax. This year’s Swedish harvest will be slightly larger than the latest five-year average, which is clearly better than the low harvest volumes of the previous year. The grain quality is generally good, apart for slightly lower protein levels than desirable for malting barley. The Finnish agricultural operations deliver a result in line with the previous year. Lantmännen Maskin reports a significantly lowe result than the previous year, mainly due to a sharp downturn in the machinery market.

The Energy Sector delivers a markedly higher result than the previous year: 675 MSEK (246). The result is primarily driven by a higher result in Lantmännen Biorefineries, where higher raw material costs in the ethanol production has been more than compensated for by historically high market prices for ethanol and feed products – as well as continued good production and sales in all businesses. The result is also positively affected by the contribution from the UK company Coryton, which was acquired in February – and by the fact that Lantmännen has been the sole owner of pellet company Scandbio since April.

The Food Sector’s result amounts to 351 MSEK (590). All businesses in the sector face great challenges in the form of price inflation and soaring prices for raw materials, energy, and transports. Cost-based price increases to customers are being implemented on an ongoing basis, but time lags affect the sector’s result negatively. Initiatives to counter the rising costs are being implemented in all production units in the sector – for example through increased flexibility in production.

The Swecon Business Area shows a result of 308 MSEK (234). The result has been positively affected by insurance compensation related to Swecon’s facility in Bochum, Germany, where a major fire broke out in November 2021. Machine availability remains limited due to facts such as component shortages and difficulties related to shipping and logistics. The activity level for construction and infrastructure projects remains high, although there has been some slowdown due to the generally weaker economy and uncertainty in the outside world.

The Real Estate Business Area shows a result of 179 MSEK (191). Last year’s result was positively affected by higher profit shares from partly-owned companies, while the high energy prices have affected this year’s result negatively. Lantmännen has moved into its new office in Malmö. Leasing of other premises – including offices, housing and retirement homes – is continuing.

«I expect the uncertainty in the world around us to persist during fall and winter. Lantmännen faces the same challenges as many other companies, and we need to remain ready to adapt quickly to changing market conditions. Despite the current uncertainties, we stand firm as a company and are able to tackle the challenges we face – in particular thanks to our broad and stable business portfolio,» says Magnus Kagevik (Graphic: Lantmännen).