Stockholm / SE. (lg) The forecast of Sweden’s Lantmännen Group shows that this year’s Swedish grain harvest will amount to 5.6 million tonnes. Following a record-breaking autumn sowing, which is forecasted to reach normal yield, spring-sown crops appear to yield slightly lower volumes than normal due to high temperatures and disadvantageous precipitation levels. Swedish farmers have sown an unusual amount of autumn wheat coming into the 2021 harvest. 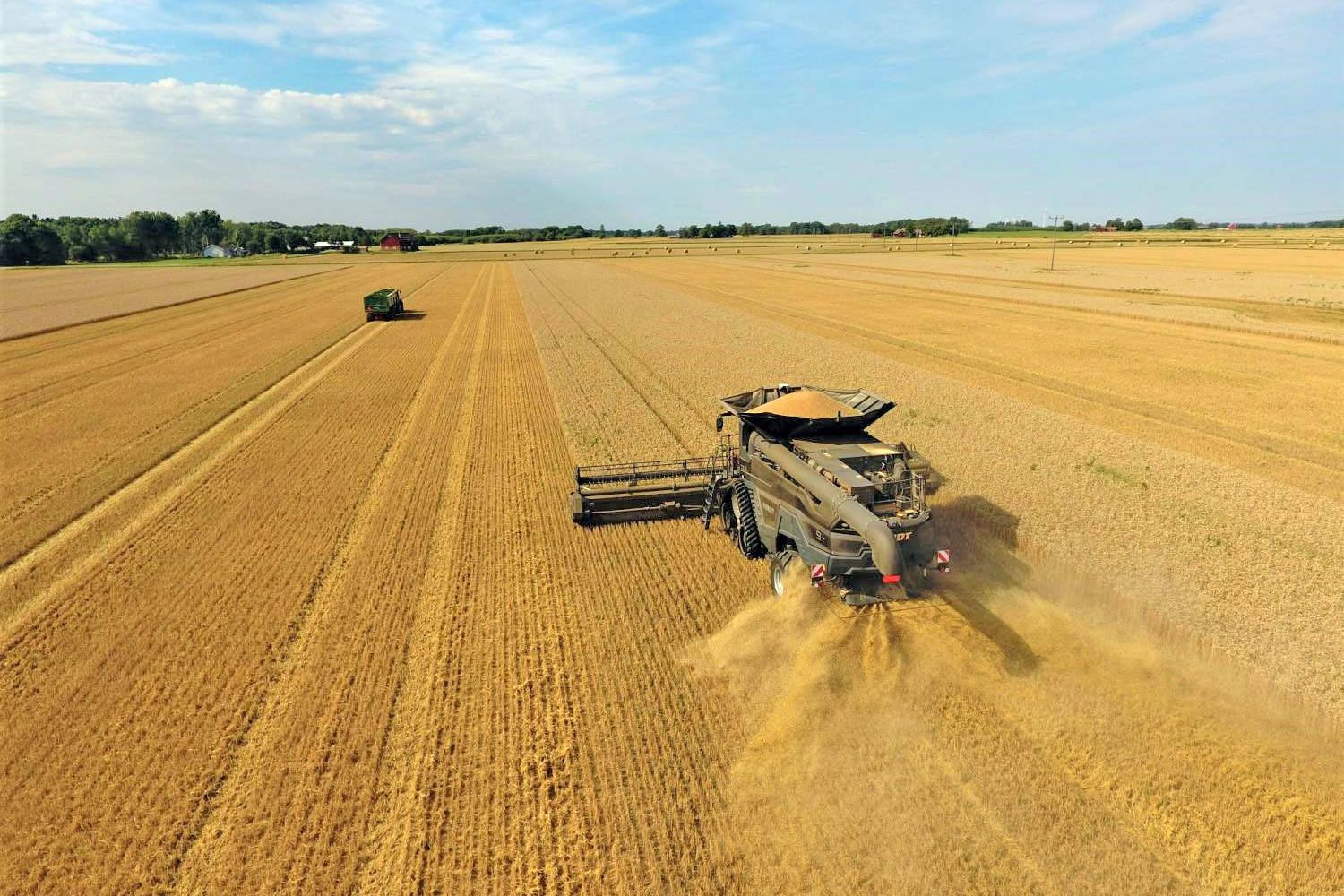 Lantmännen’s forecast for this year’s grain harvest amounts to 5.6 million tonnes, which is lower than the 2020 harvest and slightly lower than the latest five-year average – excluding the extremely dry year of 2018.

«We seem to be heading into a slightly weaker than normal harvest this year, which will be lower than the large harvests of the latest two years. As always, there are regional variations but this year they are more striking than ever. Farmers have optimized the efforts required to maximize yields based on the conditions, and we at Lantmännen look forward to taking over and handling the harvest in the best possible way. Among other things, that means preparing a large capacity for grain reception, drying and storage – and being logistically well-prepared to receive the Swedish farmers’ harvest,» says Mikael Jeppsson, Head of the Grain Unit at Lantmännen.

While the forecast indicates a slightly weaker harvest, Lantmännen continues its efforts for more sustainable and resource-efficient farming. That includes developing and investing in digital solutions, plant breeding and carbon sequestration – with the goal of increasing harvest yields while reducing the climate impact from farming.

«Securing a thriving Swedish farm industry and a secure food supply is of utmost importance. With the harvest as a starting point, we at Lantmännen – together with our members, Swedish farmers – take responsibility from field to fork. Through smart resource utilization and innovation, we can deliver sustainable, world-class farming,» says Per Lindahl, Chairman of Lantmännen’s Board of Directors.

Apart from investing in the farming industry, Lantmännen has invested heavily in developing the grain value chain and infrastructure critical to the food industry over the last several years. Among these are large investments in green proteins in Norrköping, heat treated oat in Kimstad, new grain reception facilities in Hammanhög, Hargshamn and Västerbotten, and enlarged storage capacity at several locations.

Varying conditions on the way to 2021 harvest

Conditions have varied in different parts of the country, primarily in terms of precipitation levels. Due to dry conditions in June, the harvest in the southern parts of Sweden is forecasted to be just under normal levels. Further north, especially in the Mälardalen region, the slightly lower harvest forecast is based on large amounts of precipitation during the spring.

In the autumn of 2020, a record-breaking autumn sowing was established, thanks to farmers being able to thresh last year’s harvest very quickly. Conditions were good during the autumn, and the crops could establish in a good way.

Winter came relatively late, although with great force and very low temperatures. In certain parts of the country, this led to crops freezing without protection from the cold and wind, while fields with a protective layer of snow fared well.

Spring farming started later than usual in large parts of the country. Cold weather and a lot of precipitation made sowing and subsequent establishment difficult, particularly in the area around Mälardalen. Crops in the middle of Sweden are still behind their normal development, due to the late spring sowing. This will result in a limited yield potential for spring crops in the middle of Sweden.

In Götaland, crops were behind in development for a long time, following the cold spring. The amount of sunshine and high temperatures in June put a stress on the crops, which means that they now appear to be heading for a weaker harvest than normal.

The sowing has gone well in Norrland. Farmers in this area mainly sow during springtime, and almost exclusively barley. The populations that have emerged seem to have established themselves well but it is yet too early to forecast the potential in the northern regions.

Summarized across the country, autumn crops seem to have good conditions for a normal yield, while spring-sown crops (oats, spring barley, spring wheat, spring rapeseed, peas) are headed for a lower yield.

Coming into the 2021 harvest, Swedish farmers have invested more in wheat than a regular year – primarily due to the good conditions for autumn wheat in the autumn of 2020. Autumn wheat is a more robust crop that copes with stress better, and wheat normally yields more than other grains. Demand for wheat-based products (such as flour and pasta) is still strong in food retail, but above all, the general demand globally is increasing. China’s increased production of pork leads to an increased need for feed grain – and China has more than doubled its imports of grain over the last year.

«The Swedish consumption of grain is an important basic precondition for Swedish farming, but exports are also of great importance. Thirty percent of the Swedish grain production is exported, providing important export income and creating stability in terms of self-sufficiency. Wheat is the largest export product, followed by malting barley and groats,» says Mikael Jeppsson, Head of the Grain Unit.

The harvest begins at the end of July in southern Sweden, and Swedish farmers all over the country are now preparing for an intensive work with this year’s important harvest (Photo: Lantmannen).