Tokyo / JP. (nxm) Alternative meat manufacturer Next Meats Company announced that their signature plant-based bbq meats »Next« Kalbi and Harami (short-rib and skirt steak style, respectively) will be available at the meat section of Ito Yokado; a Japanese superstore chain, starting March 29th. This is the first time the Next Meats products are going to be sold in a retail store alongside regular animal produce, giving the plant-based meats a strong positioning and remarkable opportunity to reach new customers.

Plant-based meats are becoming increasingly popular and available around Japan, but most products were typically displayed in the soy products, dried foods, or preserved food sections, which undoubtedly contributed to consumers’ lack of interest and association that it is a viable protein substitute.

»Next« Harami (skirt steak) and »Next« Kalbi (short-rib) displayed in the meat corner of superstore Ito Yokado. By the way: According to Interbank exchange rate on 27 March, 2021, European customers have to pay for 1’000 Japanese Yen exactly 7.77 Euro – please click to enlarge and to view the meat prices. 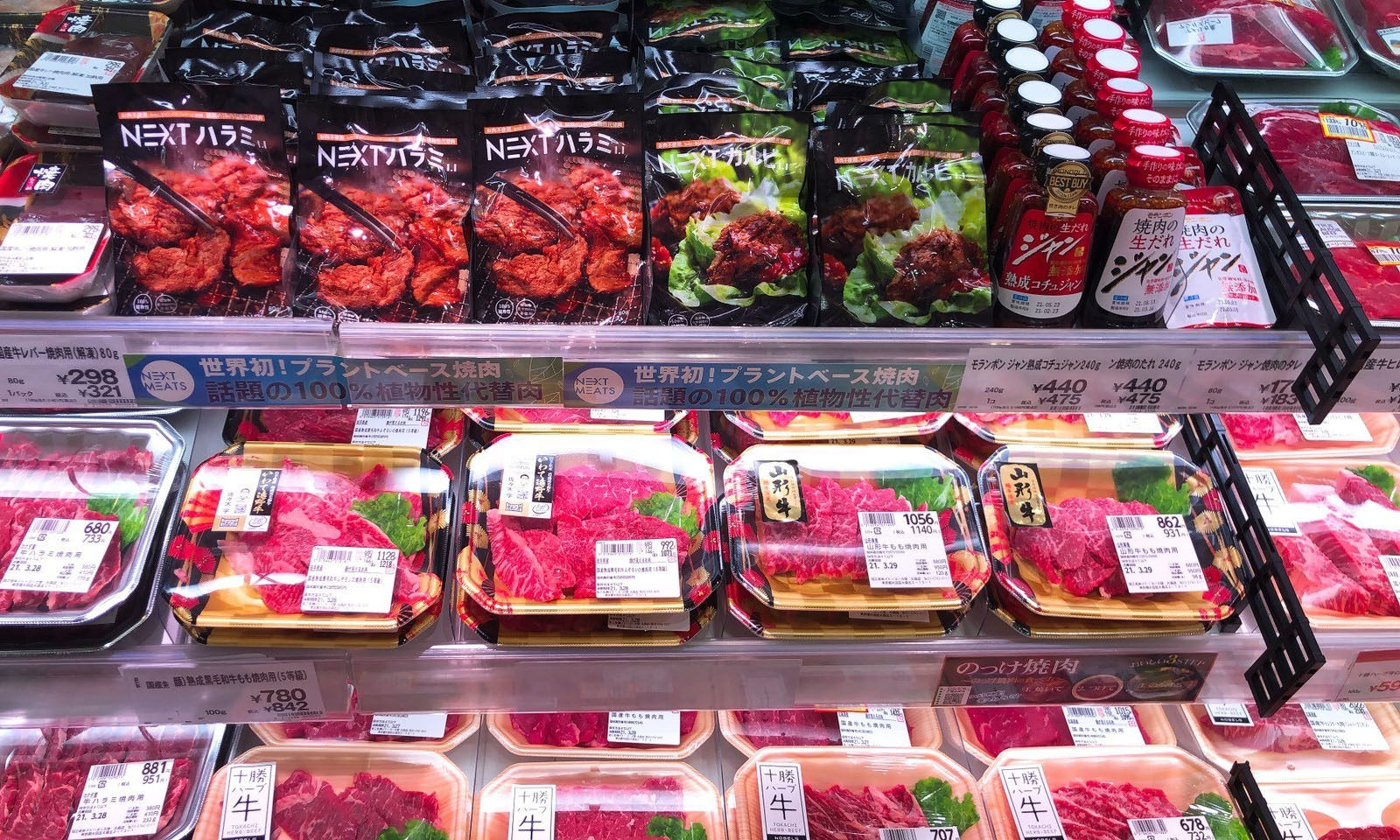 However with a superstore chain like Ito Yokado displaying Next Meat’s plant-based meats alongside animal meat, alternative proteins may finally be recognized as an equally sufficient source of protein as regular meat. Though Japan has an impressive food culture, it was quite common for travelers with vegan or vegetarian preferences to experience diet restrictions while visiting the country. But it may be safe to say a paradigm shift is coming to Japan.

Animal agriculture is one of the leading causes of global carbon emissions, but that is not widely known in Japan. Next Meats was founded to change that, and increase awareness of the climate crisis and deliver delicious beef substitutes with a taste of tradition.

Next Meats Company is famous for their rapid growth and collaboration with Yakiniku Like, a Japanese BBQ restaurant with stores all across Japan, where Next Meat’s plant based »Next« Kalbi and Harami is available. The company was founded in June of 2020 and already operates in several countries, and was listed on the American OTC Market in January of 2021.

As they strive for world expansion and move with great speed, it may not be long before you can try the »Next« products in your country (Photo: Next Meats).