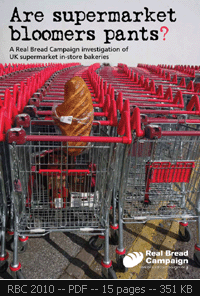 London / UK. (rbc) A nine-month investigation by the British Real Bread Campaign has found the in-store bakeries of only one major supermarket chain producing any Real Bread. Following repeated questioning of six major UK supermarket chains between June 2009 and February 2010, only Marks + Spencer advised that some of its in-store bakery loaves met the very simple Real Bread criteria of being made without the use of processing aids or any other artificial additives.

«It is great to learn that one of the major supermarkets is producing several lines of Real Bread from scratch in their in-store bakeries. If any of the others are, it is both odd and a shame that they did not take this opportunity to say so», said Real Bread Campaign project officer Chris Young. Amongst other findings, the report (PDF, 15 pages, 351 KB) also highlights that many supermarket in-store bakeries do not bake every loaf fresh from scratch on-site but bake-off dough or part-baked loaves produced elsewhere. According to an article in British Baker magazine, bake-off production: «… demands around twice the energy of conventional breadmaking». Despite this, as in-store bakeries are classed as primary production sites, they qualify for financial incentives from government, paid for by taxpayers, through lucrative Climate Change Agreements.

The Real Bread Campaign believes that people have the right to know just how in-store bakery loaves are being produced. Without this knowledge, how can we make fully informed choices between purchasing them or opting for Real Bread from local independent bakeries or our own ovens? Due to British labelling law, customers are unable to know what additives have been used in the production of in-store bakery loaves unless they ask.

About: The British Real Bread Campaign is a Sustain project. Sustain advocates food and agriculture policies and practices that enhance the health and welfare of people and animals, improve the working and living environment, promote equity and enrich society and culture. The Real Bread Campaign aims to challenge giant industrial baking companies who dominate the modern bread market. «Three companies dominate 80 percent of the bakery market – Allied Bakeries, British Bakeries and Warburtons. Local bakeries are struggling to compete against supermarkets and these giants selling industrial bread. It is vital we stand up for local bakeries before it is too late», a campaign-speaker explained November 2008.