Chicago / IL. (npd) Visits to U.S. restaurants are forecasted to grow less than one percent a year over the next decade, slower than the 1,1 percent a year growth in the country´s population, according to recently released foodservice market research by the NPD Group. The report, «A Look into the Future of Foodservice», forecasts that annual visits to restaurants will increase by eight percent over the next ten years. 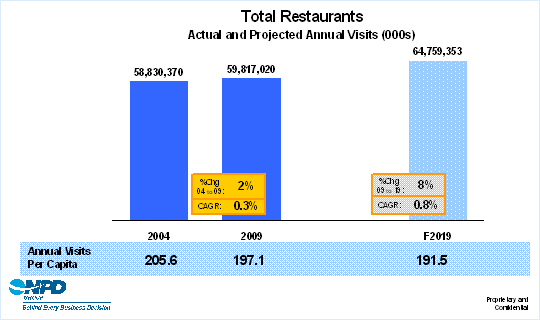 Source: The NPD Group – «A Look into the Future of Foodservice»

Trend momentum, which captures behavioural momentum based on the past nine years and includes such factors as new menu items, promotions, and restaurant openings and closings, has not been working in the industry´s favour.

«In addition to being hit hard by the recession, Americans are eating more suppers at home, and fewer women entering the workforce have negatively impacted restaurant industry traffic», says Riggs. «The current trend momentum may not appear favourable for the industry moving forward, but it´s the area where the industry has the greatest opportunity to change the direction of the forecast. There isn´t much that can be done about the aging of the population and population growth».

She points out that the growth at the breakfast and PM Snack day-parts are examples of trends that present opportunities for the foodservice industry. «Forecasts are something to be worked against, but are not cast in stone», says Riggs. «They are used to assess potential opportunities and risks for the purpose of long-term planning. The future course can be altered».