Washington / DC. (nra) Driven by stronger sales and traffic levels and an increasingly optimistic outlook among restaurant operators, the National Restaurant Association´s (NRA) Restaurant Performance Index (RPI) rose to its highest level in more than two years. The RPI – a monthly composite index that tracks the health of and outlook for the U.S. restaurant industry – stood at 102,1 in May, up 0,4 percent over April and the third consecutive monthly gain and strongest reading since March 2012. In addition, the RPI stood above 100 for the 15th consecutive month, which signifies expansion in the index of key industry indicators. 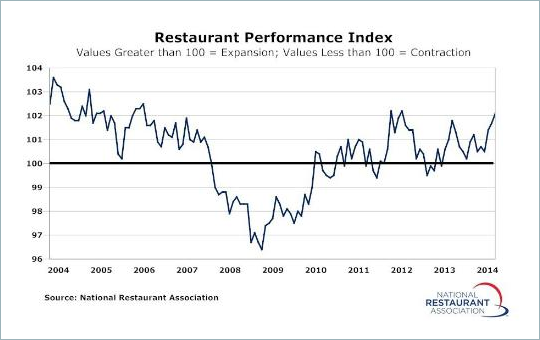 «Positive sales results fuelled the May increase in the RPI, as nearly two-thirds of restaurant operators said their same-store sales rose above year-ago levels», said Hudson Riehle, senior vice president of the Research and Knowledge Group for the Association. «In addition, restaurant operators are increasingly optimistic about continued sales gains in the months ahead, a sentiment that is also showing up in their capital expenditure plans».

The Current Situation Index, which measures current trends in four industry indicators (same-store sales, traffic, labor and capital expenditures), stood at 102,0 in May – up 0,7 percent from April and the third consecutive solid monthly gain. May also represented the third consecutive month that the Current Situation Index stood above 100, which signifies expansion in the current situation indicators.

Along with improving sales and customer traffic levels, restaurant operators continued to report positive capital spending trends. Fifty-three percent of operators said they made a capital expenditure for equipment, expansion or re-modelling during the last three months, just below the 56 percent who reported similarly last month.

The Expectations Index, which measures restaurant operators´ six-month outlook for four industry indicators (same-store sales, employees, capital expenditures and business conditions), stood at 102,2 in May – unchanged from April´s level. In addition, May represented the 19th consecutive month in which the Expectations Index stood above 100, which indicates that restaurant operators remain optimistic about business conditions in the months ahead.

While their sales outlook is generally positive, restaurant operators´ view of the economy remains somewhat clouded. Twenty-eight percent of restaurant operators said they expect economic conditions to improve in six months, while 15 percent expect the economy to worsen. The remaining 57 percent expect economic conditions in six months to be about the same as they are now.

The RPI is based on the responses to the National Restaurant Association´s Restaurant Industry Tracking Survey, which is fielded monthly among restaurant operators nationwide on a variety of indicators including sales, traffic, labor and capital expenditures.

The RPI is released on the last business day of each month, and a more detailed data and analysis can be found on Restaurant TrendMapper, the Association´s subscription-based web site that provides detailed analysis of restaurant industry trends.