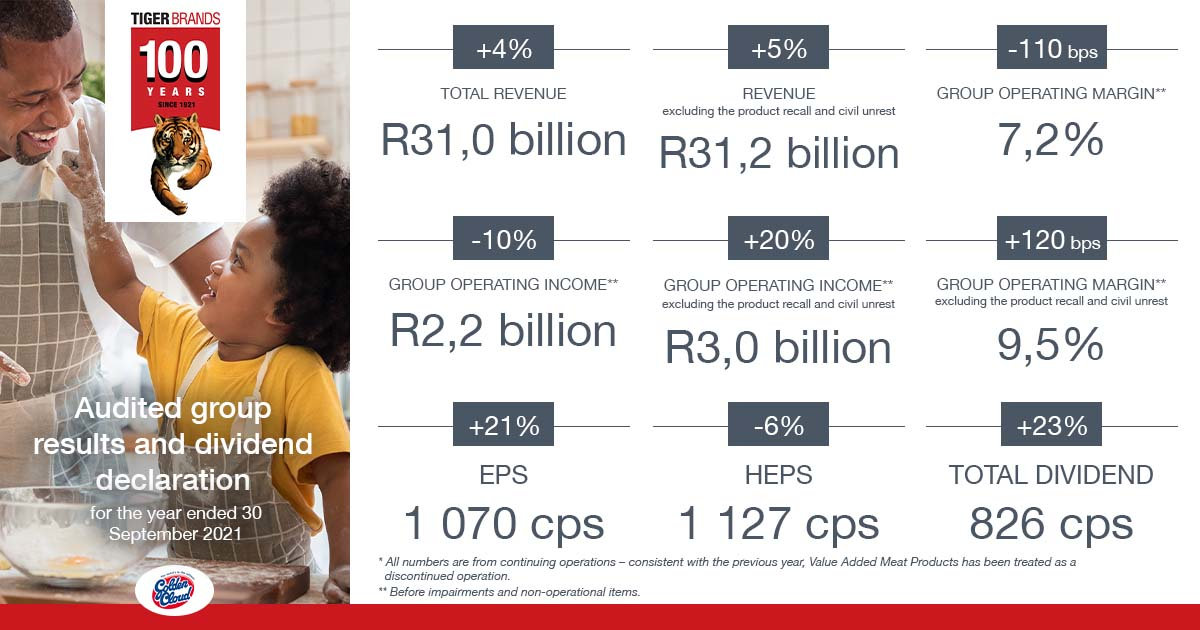 «The year under review can be characterised as a year of two halves, with a solid first half result, driven primarily by a strong first quarter, offset in part by slower top-line growth in the second half. Despite revenue challenges, our focus on cost savings and improvements in production efficiencies resulted in positive operating leverage for the full year,» says Noel Doyle, Tiger Brands CEO.

Domestic revenue in the second half was adversely impacted by volume declines across the Grains portfolio, Groceries and Snacks + Treats, compounded by lower overall price inflation relative to the first half. Despite the muted second half growth, domestic revenue for the year increased by 5 percent to R27,6 billion. Effective cost containment and improved production efficiencies resulted in positive operating leverage, with domestic operating income (excluding once-off items) increasing by 19 percent to R2,9 billion.

Total revenue from the Exports and International businesses increased by 7 percent to R3,6 billion, which was attributable to a strong start to the year as trade in Nigeria resumed following the resolution of the trademark dispute with a former distributor. The second half, however, proved challenging for Exports, the Deciduous Fruit business, as well as our operation in Cameroon. Operating income for the year reduced by 7 percent to R96 million due to increased losses in Deciduous Fruit.

«The challenging economic climate and pressure on the consumer will remain. We have made progress in strategically positioning the company for the future, becoming more consumer and shopper-oriented with a sharper focus on meeting consumers’ needs. Our priority has been on delivering value for the consumer, with plans for additional innovation in the value space,» says Doyle.

In the past year, Tiger Brands launched 46 innovation projects, an increase of 31 percent on the previous year, tapping into areas that are becoming critical drivers for consumer buying habits, including value, health and nutrition, and the growing trend to snack.

Since the launch of the Tiger Brands Venture Capital Fund in May 2021, over 500 expressions of interest were received. The company is in the final stages of making an offer for a business that is closely aligned to its health and nutrition strategy, with a further nine opportunities being assessed. In the medium to long term, the venture capital fund will provide the company with inorganic growth opportunities.

Through its agriculture aggregator model, the company further increased the number of black smallholder farmers participating in its value chain, successfully onboarding two black female-owned aggregators and expanding the number of farmers supported to 157. Projects to the value of R28,6 million were approved in the last year, with a total of eight black aggregators cultivating white beans, wheat, groundnuts, and tomatoes.

Efforts to build an inclusive culture have also paid dividends, with Tiger Brands named the 2021 Southern Africa Gender Mainstreaming Champion in the listed company category at the annual Accenture Gender Mainstreaming Awards. As part of the company’s ongoing efforts to provide a safe working environment, voluntary Covid-19 workplace vaccination clinics were introduced during the second half of the year.

«This year, Tiger Brands joined a select group of South African companies that have celebrated their centenary. We’ve come a long way since starting as a small family business in Newtown, Johannesburg. While the past few years have presented particularly high levels of volatility, uncertainty, change and increasing social, economic and environmental pressures, exacerbated by the Covid-19 pandemic, our longevity reflects the company’s resilience, the inherent strength of our brands and the quality of our people.

«Our focus now is on accelerating strategy execution. The progress we made this year, together with the non-recurrence of once-off items in 2021, should see us deliver an improved overall performance in the year ahead as we enter our second century,» concludes Doyle (Pic: Tiger Brands).