Nuremberg / DE. (gfk) Germany´s percentage of households with families is falling: 2009 marked the first time that the number of households without children exceeded those with children. At 39,5 percent in 2009, single-person households in Germany comprise the fastest growing segment of the population. Landshut boasts the highest percentage of families with children at 43 percent, while Greifswald has the youngest households at 23 percent. These are some of the findings of GfK GeoMarketing´s «GfK Demographics 2009» study.

Berlin remains the singles´ capital, while percentage of families falls Germany´s percentage of single-person households has been rising slowly but steadily for years, reaching 39,5 percent in 2009. GfK GeoMarketing annually carries out the «GfK Demographics» study, which calculates the regional distribution of household types. The study confirms that Berlin remains Germany´s undisputed singles´ capital in 2009 at 53,5 percent, outpacing the cities of Wurzburg and Munich, with 52,6 percent and 51,9 percent respectively.

«Germany´s growing number of single-person households reflects a demographic trend», explains Simone Baecker-Neuchl, head of GfK GeoMarketing´s market data + research division. «The percentage of retirement-age citizens has been slowly but continually increasing for years. Many of these individuals live alone, whether due to separations or the death of their partners. At the same time, young people are waiting longer to cohabit or start a family. Consequently, the percentage of children in the country is falling. This affects the nation´s typical household profile».

«Also, people of all ages are increasingly living alone. This trend is particularly pronounced in large cities, where the percentage of single-person households often amounts to almost half of all households».

Six of the top ten districts with the highest share of young households are located in the eastern federal states. Less surprisingly, western German student cities such as Freiburg im Breisgau and Heidelberg also make it into the top ten.

The «GfK Demographics» study examines socio-demographic factors and is calculated for a range of regional administrative levels. It provides information on Germany´s population and households according to household type (single- and multiple-person with or without children, immigrant households …), household age (age of household head …), income level (divided into seven brackets …) and the architectural profile of the residence (source). 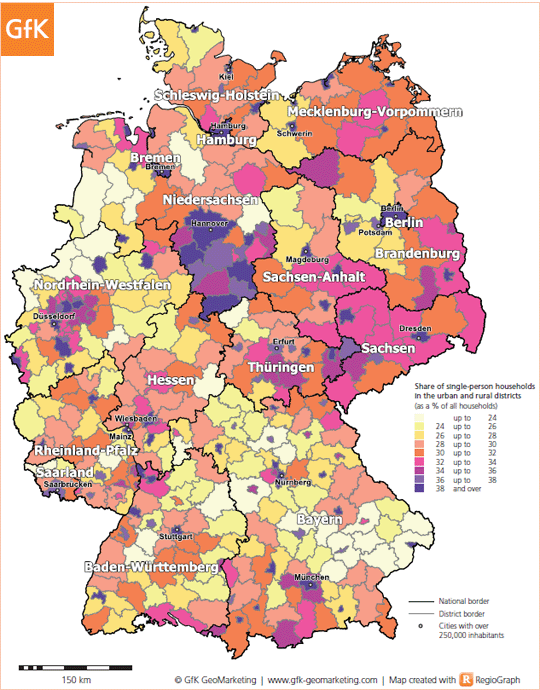